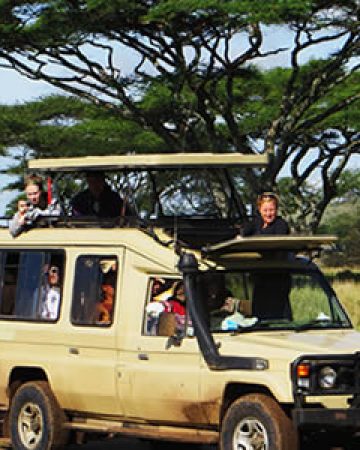 Early in the morning, leave your hotel in Arusha to Tarangire National park with packed lunch. The drive time from Arusha to Tarangire is about 2-2.30 hrs. Upon arrival, check in at the gate and start the game drive, as it’s possible to start spotting animals right after you enter the park close to the park gate. The lunch box will be served at the picnic site inside the park where you will enjoy your food while viewing the wildlife (possibly elephants, antelopes, and monkeys) around the picnic site. After lunch, continue with the game drive for the rest of the afternoon. After, drive back to Zayoni campsite for dinner and overnight.

After your breakfast at 08.30, drive from Tarangire with your packed lunch to Manyara park for game viewing. At 1300 hrs, take your lunch in the park picnic area, then have an evening game drive to your campsite for dinner and overnight at Manyara.

About Manyara National Park
A major attraction of the Lake Manyara National Park is the tree-climbing lions. Unfortunately, there is no guarantee that you will spot them. However, there are countless other things to see: elephants, hippos, zebras, impalas, buffalos, baboons, and plains animals, as well as huge variety of birdlife, both resident and migratory.

At certain times of the year, Lake Manyara is home to thousands of flamingos (attracted by the Lake itself), which form a shimmering pink zone around the lake shore. Other birds found here include ostriches, egrets, herons, pelicans, and storks. Also seen are African spoonbills, various species of ibises, ducks and the rare pygmy geese. The most noticeable feature of the landscape within this park are the very impressive baobab trees with their huge trunks.

After breakfast at 08:00 am drive from Lake Manyara National Park with your packed lunch and game drive en route to the great Serengeti Plains via Ngorongoro Conservation Area. Late afternoon drive to your campsite for the dinner and overnight.

About Serengeti Endless Plains: The Serengeti National Park, covering 14,763 square kilometers, is one of the world’s largest wildlife sanctuaries. One of the most breathtaking events in the animal kingdom, the migration of thousands of wildebeest, takes place here every year. The Serengeti, 320 kilometers from Arusha, was gazetted in 1951. It was accepted by the World Heritage Convention as a World Heritage Site and Biosphere Reserve in 1981.

Early in the morning leave the campsite for a sunrise game drive, as this is the best time to try spotting the lions hunting so it possible to see a kill. Apart from that, you will get a chance to enjoy the magnificent sunrise of the Serengeti plains. There are plenty of other animals to spot during this time. After this short morning game drive, we go back to the lodge for breakfast, and then shortly after breakfast get ready to leave for a whole day game drive with packed lunch. This game drive will give you a chance to enjoy and see everything Serengeti has to offer, from wildlife to nature in general. In the evening, drive back to the campsite for dinner and overnight.

After breakfast, disembark with your packed lunch and game drive en route to Ngorongoro Conservation Area. It is your option whether you pass via Olduvai Gorge (a historical site whereby the early man lived) or via the Maasai Boma (if you are interested in African tradition and culture). Upon arrival, dinner/overnight at Simba campsite on the crater rim.

After breakfast, descend into the crater for a tour around the unbroken caldera that encloses the wildlife. Lunch at Ngorongoro crater picnic site near Lerai Forest or hippo pool, and after lunch proceed with a game drive on your way out of the crater and back to Arusha.

The crater supports up to 25,000 large mammals. Grazers dominate the landscape: zebra and wildebeest account for almost half the animals; and gazelle, buffalo, eland, hartebeest, and warthog join them. Giraffes stay away because there is insufficient food at tree level. An odd feature of the crater elephants is that they are almost exclusively bulls. Breeding herds – comprising large numbers of females and young with a few attendant older males – are probably unable to find sufficient quality food in the crater.

Tanzania Camping Safari PackageStarts at US$880 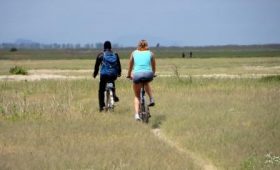