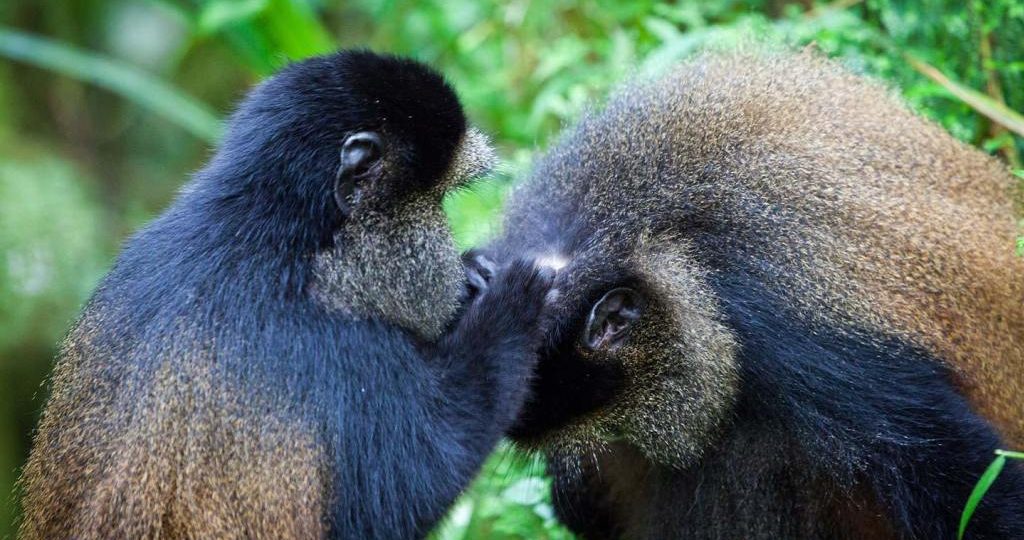 Rwanda’s gorilla trekking is a once-in-a lifetime experience (easily added on to any African safari). But there is plenty more on offer. Volcanoes National Park is the place to be for gorilla trekking, and volcano hikes. Chimps and many other primates can be found in Nyungwe Forest, while savannah safaris are offered in off-the-beaten track Akagera National Park.

Rwanda has an amazing variety of primates. Aside from mountain gorillas and chimpanzees, there are many different monkey species to look out for including the very localized golden monkey, as well as l’Hoest’s monkey, Rwenzori colobus and red-tailed monkey. All of the Big Five can be seen in Akagera NP but there is no cheetah in Rwanda.

Most people come to Rwanda for gorilla trekking, but many smaller primates can be seen as well, including habituated golden monkeys. Other species to look out for are l’Hoest’s monkey, red-tailed monkey and Rwenzori colobus. Rwanda has one savannah reserve where most safari animals can be seen.

While gorillas can be tracked in the Virunga mountains, chimpanzee trekking in Nyungwe Forest is another highlight. Akagera National Park is a Big Five destination; elephant and buffalo are common, but lion and rhino sightings are a bit more hit-and-miss. Although leopard is very shy, you might be lucky to spot one early morning or late afternoon. There is no cheetah in the country.

Straddling the equator, temperatures are quite uniform throughout the year and there is no real winter or summer. Daytime temperatures are around 27°C/81°F. There is a Dry season (from June to September) and a Wet season (from October to May). The Wet season is divided into the short and long rains with a short period of drier weather in between. The short rains are from October to December and the long rains are the wettest months from March to May.

Straddling the equator, there is little year-round fluctuation in temperature and no real winter or summer. There is a defined Dry season from June to September, but in Volcanoes NP and Nyungwe Forest that only means that it will rain less as these parks are wet throughout the year.

Ready to plan your safari with us or just find out more?